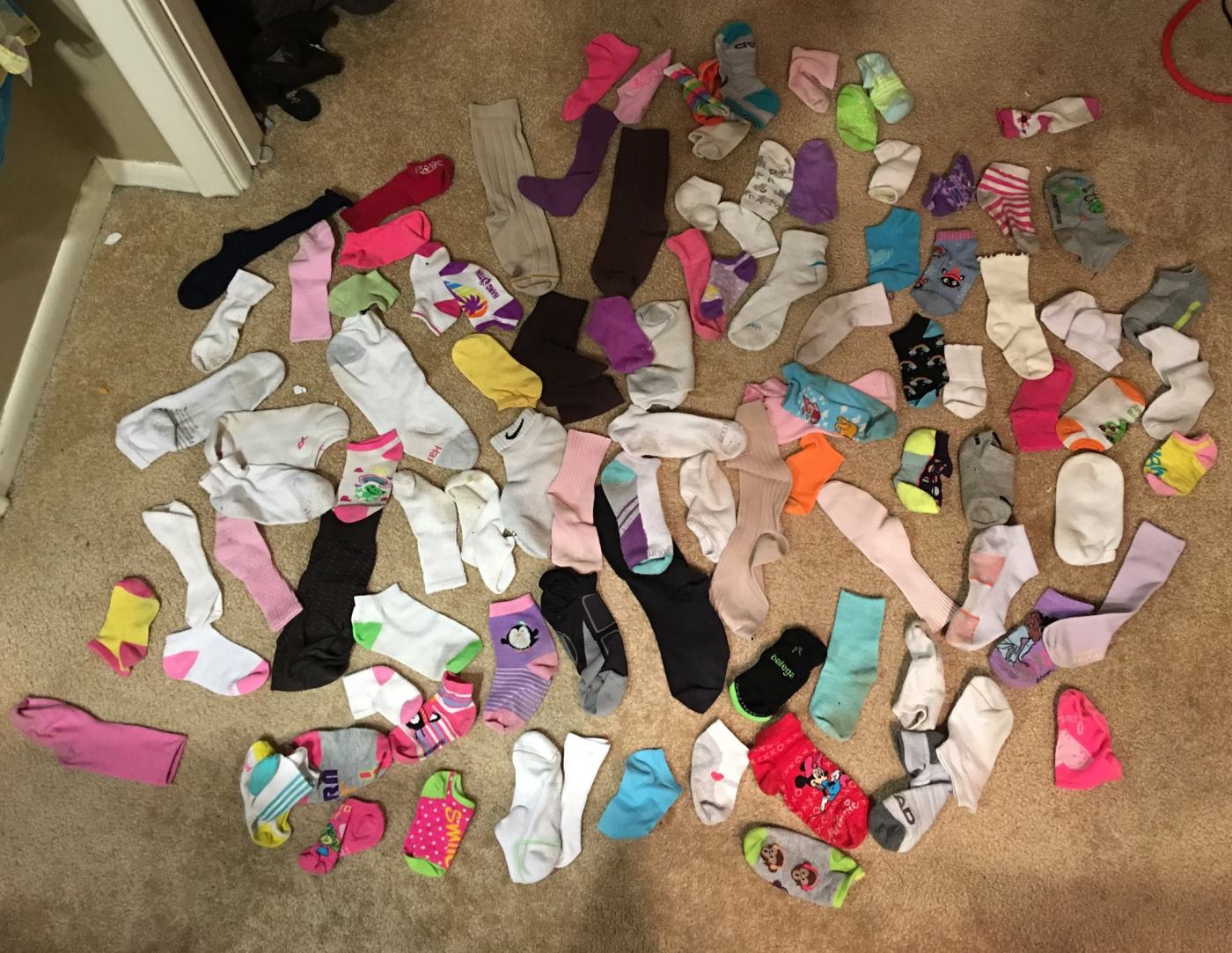 Therefore, if anyone is in Christ, the new creation has come: The old has gone, the new is here! All this is from God, who reconciled us to himself through Christ and gave us the ministry of reconciliation: that God was reconciling the world to himself in Christ, not counting people’s sins against them. And he has committed to us the message of reconciliation. We are therefore Christ’s ambassadors, as though God were making his appeal through us. We implore you on Christ’s behalf: Be reconciled to God. God made him who had no sin to be sin for us, so that in him we might become the righteousness of God.

I am sure I am not alone in the challenge that lay before me this past Sunday night. It was a monster a didn’t want to face, a personal challenge I had been putting off tackling, an ever present stress that resurfaced once or twice a week that I simply didn’t want to ever deal with…

It was our mismatched sock box.

At the point of writing this I have 3 daughters that are 9, 7 and 3 years old. Over the last nine years we have had lots of growing feet, fun patterned socks purchased, and mysterious disappearances. I need someone who lives on the conspiracy theory fringes of the Internet to prove for me definitively that this is undeniable proof that aliens exist and that they feast on socks. I frankly have no idea how else this happens!

In any case, every time we do laundry and a new sock exists without a match, into the box it goes. In theory there will be a day where we tackle this monster. Unfortunately, like most challenges we put off facing in life, the longer you put it off, the larger it grows.

Sunday I decided it was time to tackle it. After getting 100% of the laundry done, scouring the girls’ bedrooms for any strays that were tucked under dressers, lost in a corner, etc. I was confident I had 99% of the socks I would ever find ready to be matched. Then I went to battle.

By the end I had found an additional 45 matches between the five of us. Success!

And there were 91 socks left over…

First of all, how did we ever get to the point over nine years where we accumulated 91 unique socks between our entire family? Secondly, how could we possibly have lost 91 socks? Mind-boggling.

I gathered them up and finally did what I should have done a long time ago; I threw them out.

I started to think Sunday about how much less annoyance I would have experienced over the last nine years if I had been comfortable throwing away one sock a month when the pair came up missing as opposed to clinging to the lone remaining sock. Instead, every time a new sock was added to the box, I grew frustrated. I watched it grow and grow and felt like an idiot. How does this keep happening? And why am I hoarding these?

As I was lying in bed Sunday night I began to smile thinking about the fact that we tend to do that with almost everything in life as Christians.

In 2 Corinthians today, “Therefore, if anyone is in Christ, the new creation has come: The old has gone, the new is here!”

Whatever struggles have existed in our lives, Jesus wants to wipe the slate clean and make us into a new creation. Whether these be self inflicted challenges and sin issues that we struggle with, or circumstances that occurred in our lives that we had no control over, Jesus wants to give us freedom. He wants to release us from the bondage. He wants us to walk out of that prison cell into freedom. He wants us to truly be a new creation and not just pay lip service to that notion. He wants us to genuinely turn these things over to him.

So much easier said than done, but worth fighting for!

I know that I personally find it hard to find that perfect balance in life when it comes to processing the things that have happened, considering why I am wired the way I am, and digging into these issues to understand myself better; and letting certain things go so that I can really embrace that the old is has gone and the new is here.

I think there is a healthy balance that can be struck.

I wish over the last nine years our sock box had a one-week limit. Throw it in the box temporarily and if the missing sock turns up over the next week as we do the rest of the laundry, great! If not, throw it out. Don’t be a slave to the thought that, “Maybe one day, the partner will return!”

I think the same general principle applies to giving things over to Christ. I believe it is critical to really process events that have happened in our lives, ask God to show us what lies we believe because of these events, what negative thought patterns arose because of them, and what habits we have formed as a result that keep us from living full lives with him. However, there are times where I think I have processed these things to death and it is just time to give it over to God and let it go.

It is time to throw out the socks. It is time to believe Jesus and trust that we really are capable of being a new creation. We don’t need to remain in bondage. We don’t need to fall into the same old habit pattern. There is freedom. The prison cell door is standing wide open. We really do have the ability to just walk out at any time if we choose to fully submit to him.

Again, easier said than done. However, I believe that one of the weapons of the enemy is telling you to hoard the socks. “Don’t let go of that event just yet. Don’t fully forgive that person for what they did. Don’t fully release yourself from the guilt and shame you feel over that decision you made and trust that the blood of Christ is enough to cover it. Plus, do you really believe you are a new creation? Save the socks. There might be a day where the other one shows up. Just tuck them away where you won’t see them all of the time.”

Unfortunately, when we refuse to turn things over to God, every time we lose another sock, we once again find ourselves confronting the entire box all over again. Every negative emotion, self destructive pattern, forgiveness we have been refusing to give, guilt, shame, frustration, anxiety, etc. comes flooding back immediately. They were just sitting there waiting in the closet waiting to remind us that, “we really aren’t a new creation”. They are sitting there telling us that we will never be enough.

Throw out the socks.

Jesus paid it all and freedom is waiting there.

If you have one more load of laundry to do in your life and you really need to dig into some issues that you have refused to deal with for the longest time, do the load. Don’t be afraid of what might come out of it. Get with a trusted friend, a counselor, a pastor, etc. and dig in. Let’s find whatever matches we can so that healing can take place and we can accept the free gift that Christ has given to us.

Then throw it away. Stop letting whatever it is control your life. You really are a new creation! Freedom has been waiting there all along. We just need to stop believing the lies that we still have a little more to fix in our lives before we can fully experience it.

What socks have I been hoarding? What laundry is there to still do in my life so that I can find some matches and then let it go?

9 thoughts on “Throwing out your mismatched socks”

As always, thank you for commenting and sharing! Your comments are always encouraging and appreciated, and I would be honored if you chose to share this blog with others.